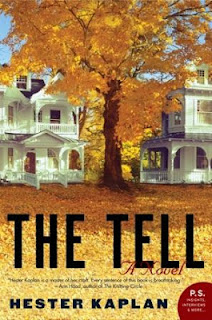 In The Tell Hester

Kaplan has woven a story of intrigue, connections, relationships, memories, history and more.

Admittedly, emotion is hard to come by in the early pages.

Our triangle of characters is so intertwined, and yet, so distant. So separate. So individual.

But there would be no story without any one of them.

We meet Owen, and immediately meet Mira. His wife. Don’t their names (especially hers?) just flow so well? They seem to have so much, and so little. Possessions? Check. But money? Not so much. The home they live in and everything in it dates back to Mira’s history. Her family. Her deceased parents. We imagine the loss she experienced. We know why she holds onto everything.

I do – I could totally relate, especially to the point where she tells her husband why she just CAN’T part with a single thing. It made me connect with Mira in a

way that I hadn’t yet in the story.

But before that point I started to doubt her. Which isn’t to say I don’t doubt her again later on. Or that you won’t. But that one line, that one reveal. She seems more human. More real to me.

Because you see, Wilton came along. He arrived early on. So early on that we didn’t have a chance to trust or doubt Owen and Mira’s relationship. I almost wanted to see more of them before he arrived.

Mira seemed so drawn to him so quickly. Pulled

Was it his persona? Who he was?

The back cover of the book describes him as “an aging, no longer famous TV star”, but I wonder

if that is enough. What is his agenda? Why is he here? What do we know, learn, think about his daughter? When will we finally meet her? Will she actually play a role in this book – or just be an extraneous character? Does she actually exist? So many questions as we make our way through the pages.

he develops. With Mira, obviously. Straight away. With Owen, differently. Doubt, and yet, Owen, too, seems sucked in. Forced to open up. What is it about this guy?

His story. He shares with Owen. We hate him. https://www.acheterviagrafr24.com/viagra-en-france/ We don’t want him around. We root for Owen and Mira. We doubt Wilson’s intentions.

There is so much more to this story. It’s well written and Kaplan draws us in early on.

It’s a classic but not-so-classic relationship story. With twists and turns and – well – tells, I suppose.

It’s thorough. It’s deep. There’s a lot of detail, and I can’t say that it was anything unnecessary. Even closing in at 300+ pages, the book doesn’t overdo it. I think if you decide to read The Tell you won’t be disappointed. It’s an enjoyable read. And feels like a real story. Where

you could know the characters in your own life. Sort of. I don’t know anyone with such possessions as Mira had, but I do know people like her. People like Owen. What do you think? Could you relate? Pick up your copy and see.

I am participating in this review as a

part of TLC Book Tours. I was provided a copy of this cialis generique book to facilitate my review but all expressed opinons are my own.